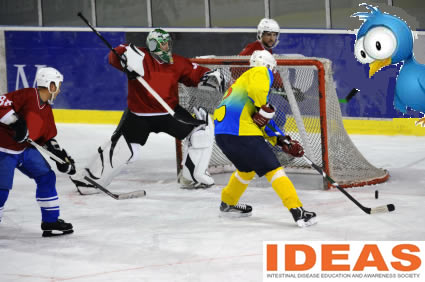 The Intestinal Disease Education and Awareness Society conducts awareness and education campaigns to eliminate the stigma of living with an intestinal disease. Our programs help children and youth afflicted with intestinal disease live healthy, productive lives. IDEAS also contributes funds to research to find a cure for Inflammatory Bowel Disease.

IDEAS is giving away two (2) tickets to an Olympic hockey game in Vancouver, BC as the prize in a Twitter contest to raise awareness of intestinal diseases. Hockey is one of the most sought-after tickets to the games and you could be walking into that venue to catch live, in-person hockey action, with a friend, absolutely free!

Here’s how the contest works:

I’m following @weneedIDEAS to raise twareness of intestinal diseases and win Olympic hockey tickets, you can too: http://bit.ly/aX3M0Z

3. Watch your Twitter account on Monday, February 8, 2010 to find out if you’ve won. The winner will be announced before noon PST.

Contest information
This is a free, Twitter-only giveaway contest. These Olympic hockey tickets were donated to IDEAS and are being given away, there is no contest entry fee.

Contest rules
Only one entry per contestant will be entered into the random draw. All valid entries will be assigned a sequential number and a winning number will be selected using Random.org. Unfortunately, only British Columbia residents are eligible to win.

If a winner is unable to claim their prize, numbers will be selected randomly until an eligible winner is found. IDEAS is the sole judge of the contest winner.