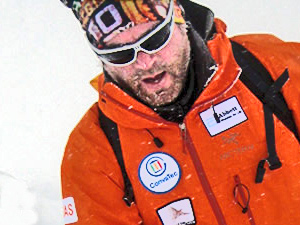 A Nanaimo man who summited Mount Everest two years ago now features prominently in a new documentary currently being screened across Canada, the final peg in his Seven Summits bid.

Rob Hill, 41, is portrayed in self shot video footage on the “brutal” trek up the world’s highest mountain in 40 Days in Base Camp.
In that ascent, Hill became the first person with Crohn’s disease to reach the peaks of the tallest mountains on each of the seven continents in his quest to raise awareness of the intestinal disease through his non-profit group, Intestinal Disease Education, and Awareness Society, or IDEAS.

While he has lived all over British Columbia, he now calls Nanaimo home with his wife and newborn son.
“It was just a struggle,” said Hill, who lost his large intestine and colon to Crohn’s, a type of inflammatory bowel disease. “There is very little air up there, obviously, and it’s tough to move and tough to breathe. “When you do take moments, it feels like the most spectacular place in the world. Nothing’s underneath you. You’re looking down on the Earth.

Robert Hill’s role in the film came about by happenstance. He was making his second shot at Everest after a failed attempt two years prior when he experienced a structure in his intestines, and the filmmakers were at base camp looking for footage “up high.” They found Robert Hill, and their interest was piqued by his extraordinary story and altruistic motivations.

The documentary centers itself on his story and those of two others – the youngest Indian man to ever climb the mountain and Apa Sherpa, the record-holder for the most summits of Everest.

“In the climbing world, he’s kind of like Michael Jordan,” said Robert Hill. “I hadn’t met him until I was up there and we crossed paths a few times on the mountain. He’s a very humble man.”
40 Days deals in part with the less glamorous or romantic side of the mountain, the effect of climate change on the mountain’s ecology and the surfacing and deterioration of human remains being unearthed by the melting glacier.
Hill said the odd little village that is base camp, popping up out of nowhere, is a “weird place to be.” He noted a lack of camaraderie, even in a place where co-operation often means survival, and the presence of big businesses whose only goal is to get high-rolling clients up and down the mountain as quickly as possible.\
“So somewhere in there you have to work together but you also have these big and fragile egos,” Hill said. “People are there to climb so they have something to talk about at their next cocktail party.”

The movie accurately relates what it’s like to be up there and the exertions and strains of the climb said Hill, whose own efforts were severely impeded by his illness.
He reached the south summit of Everest on May 24, 2010. That moment, coming as it did after the trials of the climb, frustrating waits in camp with bad weather and incidents such as stolen oxygen, was the culmination of years of labor and preparation.

The climbing started for Hill after being diagnosed with Crohn’s at age 23. “For myself, when in life faced with an illness that really almost killed me, it was a struggle to get out of bed. … I basically couldn’t absorb any nutrients, and (my body) was eating muscle mass to stay alive. I was dying, basically,” he said.
After the drastic surgery that resulted in the loss of his organs, he started recuperating and feeling better.

In climbing, he found a way to revisit a struggle that reminded himself of how strong he could be, a sentiment similar to those espoused by athletes like Lance Armstrong.

“The pain of climbing Everest or doing the Tour de France doesn’t compare to what you’ve gone through when you’ve had your health so jeopardized,” said Hill.
“For me, growing up with Terry Fox and his cancer, there was a gentleman who stepped outside his illness and did something about it.”
Hill started his Seven Summits with a climb of Mount Elbrus in the Caucasus region of Russia in 2001, the tallest mountain in Europe. He followed that up with ascents of Mount Kilimanjaro in Tanzania, Aconcagua in Argentina, Mount McKinley/Denali in Alaska, the Vinson Massif in Antarctica, and the Carstensz Pyramid in Indonesia.
The number of people who have accomplished all of these climbs is still in the low hundreds.
He did all of this to raise awareness of the intestinal disease and raise funds for organizations dedicated to fighting it. Robert Hill said this is what’s really kept him going climb after climb over the past decade.
“I’ve mentored a lot of kids with the same illness.

That’s a huge part of it. Watching the change in kids’ life when you explain to them or teem them into these environments and show them they can do it.”
Hill, who moved to Nanaimo two years ago to be closer to family, is now training in the city and planning for his next big adventure, although he notes he’s not pushing sponsors too hard in today’s economy.
For more information on Hill’s group or his climbs, visit nogutsknowglory or weneedideas Information on the film can be found at 40daysatbasecamp. com.
——————
HILL’S 7 SUMMITS
Carstensz Pyramid:Australia 2007, 16,023 feet
Vinson Massif: Antarctica 2006, 16,050 feet
Mount Elbrus: Europe 2002. 18,481 feet
Mount Kilimanjaro: Africa 2003, 19,330 feet
Denali/Mount McKinley: North America 2005, 20,320 feet
Aconcagua: South America 2004, 22,626 feet
Mount Everest (base camp): Asia 2008, 17,600 feet
Mount Everest (south summit): Asia 2010, 28,704 feet