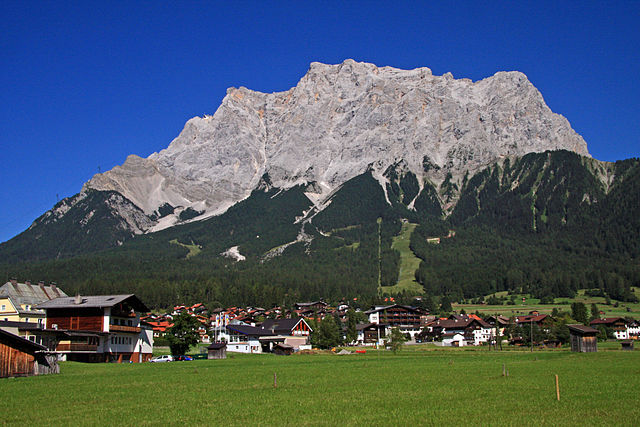 BAVARIA, GERMANY–Despite his ostomy, Canadian Rob Hill today climbed from Garmisch Partenkirchen up the Zugspitze  the highest mountain in Germany. Doing this as part of the Great Comebacks® program, the 35-year-old hopes to encourage others with the same condition to likewise set ambitious goals. Upon his arrival at the summit, Hill said: “This climb is to demonstrate what can be achieved despite such a handicap. Everyone with a stoma can overcome their own personal summit each day.” The athlete had his large intestine removed some 10 years ago.

Rob Hill was received at the Zugspitze by representatives of the patient association Deutsche ILCO (the German Association for Ostomates). “It would be wonderful if all ostomy patients would cope with their condition with such an open and hands-on attitude as Rob demonstrated today,” declared ILCO member Lothar Bauer. Approximately 100,000 people live with a stoma in Germany. With an ostomy, parts of the intestine are removed and the exit is moved to the abdominal wall. Most often, it is intestinal cancer or inflammatory bowel diseases such as Crohn’s disease or ulcerative colitis that make this severe surgery necessary.

Rob Hill overcame the approximately 2,250 meter climb up Zugspitze in eight hours the usual time necessary for this climbing route. Moreover, the ascent over alpine climbing passages and a small glacier is only for experienced and well-conditioned climbers. Hill faced a particular challenge: since he has no colon, his body is not able to take up as much food and water as a healthy athlete.

Hill has been the center of international attention since 2002 with his ambitious mountain climbing. He has already climbed six of the highest summits of the seven continents. With his climb to the summit of Mount Everest planned for the spring of 2008, Hill wants to be the first stoma patient to have mastered the so-called Seven Summits.

The Zugspitze climb was supported by the medical products manufacturer ConvaTec.

Now 35 years old, Rob was diagnosed with the chronic inflammatory intestinal disease Crohn’s and Ulcerative colitis at the age of 23. The serious development of the diseases (diarrhea, cramps, continuous weight loss) necessitated the complete removal of his large intestine. Afterwards, when Hill was doing drastically better, he decided to climb the Seven Summits, the highest summits of the seven continents. He wanted to set an example for himself and others and show that it is possible to set and achieve new ambitious goals after such a serious surgery. Since 2002, Rob has climbed six summits: Mount Elbrus in Europe, Mount Kilimanjaro in Africa, Mount Aconagua in South America, Mount McKinley in North America, Mount Vinson in Antarctica as well as the Carstensz Pyramid in Australia/Oceana. Hill has been an ambassador of the Great Comebacks® program since 2005.

Deutsche ILCO is the support organization in Germany for people with a stoma (people with an ostomy or urostomy) and intestinal cancer as well as their relatives. Deutsche ILCO seeks to remove the stigma of stomas and intestinal cancer. It is committed to high-quality, professional care and offers the necessary stoma items and medicine without unreasonable financial burdens. Deutsche ILCO supports initiatives for the promotion of causal research and prevention. (www.ilco.de)

The Great Comebacks® program was launched in 1984 in the U.S. as a collaboration between the Crohn’s and Colitis Foundation of America and ConvaTec. Its goal is to promote a better understanding of the needs and problems of people with chronic inflammatory bowel diseases (IBD), cancer of the large intestine and/or a stoma. In addition, Great Comebacks offers information and education to people with the above conditions and recognizes outstanding achievements of patients with awards. The initiative is active in the United States, as well as in the United Kingdom and Ireland. (www.greatcomebacks.com) At the moment, a similar information program for those with the condition is being prepared in Germany.

An ostomy is necessary when a section of the digestive system is damaged or inflamed (especially by Crohn’s disease, ulcerative colitis and intestinal cancer) and is no longer functioning normally. A surgical operation (ostomy) is carried out to create an opening in the body, through which a section of the small or large intestine is led and fixed to the skin. This opening in the abdomen is called a stoma. After the operation, waste materials are led through this stoma into a pouch attached to the abdomen. With the exception of activities that require heavy lifting, a stoma should not prevent one from leading a normal, active life. Approximately 300,000 people in Germany have chronic inflammatory intestinal disease, and 100,000 people have a stoma.

With an elevation of 2,962.06 meters above sea level, the Zugspitze is the highest mountain in Germany. From Garmisch-Partenkirchen at the foot of the mountain, it is another 2,250 meters to the summit. The many avalanches on the steep cliffs on the north side of the mountain gave the Zugspitze its name. The ascent along the alpine climb is usually reserved for experienced and well-conditioned climbers, and usually lasts between eight and 10 hours.

Bristol-Myers Squibb is a global pharmaceutical and related health care products company whose mission is to extend and enhance human life.