There’s a Canadian film crew in base camp this year documenting a two-part series on Everest culture. Today they popped into our camp to interview each of us and gather some footage before the team heads up to C2 for their final acclimatization climb prior to their summit attempt. 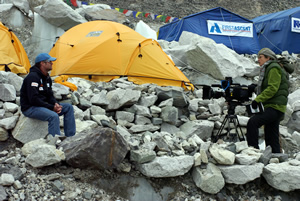 “It was a nice distraction for us today,” said Rob. “It’s always great to meet people from back home and hear about what they’re doing. I was especially glad to hear that much of the focus of the documentary is on the Sherpa culture. I don’t know if there is enough understanding about just how important these people are to the Everest experience. There is no way we could be climbing this mountain without them.”

The film crew is small, just a camera person and the film maker. But they plan to spend at least 40 days in base camp speaking with Sherpas, the Nepalese support teams and the climbers, following stories up to the summit and back down to base camp – although the filmmakers themselves will not be climbing higher than base camp. 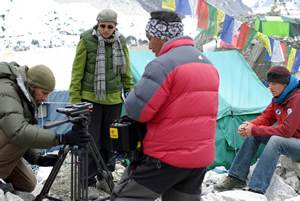 “Much of the focus, of course, was on Rob and his story,” explained John. “But it’s great they took the time to interview the whole team and capture everyone’s perspective on the Everest experience. There is so much going on up here, between the climbing, the mountain clean-up efforts of some teams dedicated to the task, the local people who support the expeditions, that it’s hard to capture the whole story. I look forward to seeing the finished product sometime in 2011.”

Ropes are fixed as high as camp four now. The NGKG Sherpa team begins ferrying loads to C3 and C4 tomorrow. The weather has been windy and cold lately, potentially pushing back any early May summit attempts. The consensus around base camp today has the first summit window opening sometime after May 6, with many teams, including ours, thinking May 10th to 12th for summit bids.