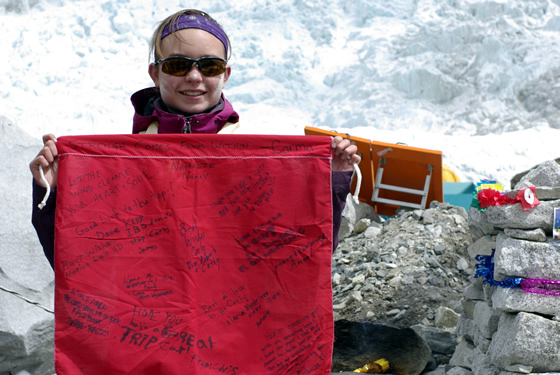 Carly's Journey to Everest base camp

Being to Everest base camp with the IDEAS team really was an awesome experience. I still can’t believe I did it. Never in my wildest dreams did I ever imagine I’d be standing at Everest Base Camp. “Trouble” (my ileostomy) certainly isn’t living up to its name… but quite the opposite, opening doors and challenging me in ways I never dreamed possible.

The word trek is a Dutch South African word that means a slow arduous journey. And that is exactly what this trek was. The overall distance wasn’t a concern with all the training I had done. However the altitude was the challenge I could not prepare for or predict. Three or four times, we made great strides reaching higher elevations, only to turn around and go back down to where we started. Even on these days bed time couldn’t come soon enough at 8 o’clock.

This word trek became real when my mind and body said go, you can keep up with the leaders, Big John and Rob. But after a few tries, it was obvious my lungs couldn’t keep up, as I was forever stopping to catch my breath. Walking in John O. & Phil’s footsteps solved my problem in guiding me to keep a slow even pace.

Being a picky eater to begin with, food was a difficult challenge. Between limited choices and the negative effect the altitude has on your appetite my diet stayed safe and simple with pancakes and momo’s as the top choices. Oh, and chocolate cake was a great motivator!!!

Picking up something as simple as a cold made me put the maximum effort into continuing to put one foot in front of the other between fits of coughing the day we went to the top of KalaPatthar. Thanks to lots of team encouragement & Sherpa kindness it was clear that giving up was not an option. And I’m glad I didn’t. The view of Everest was amazing. We sat at the top, with the sun basking on our faces for that once in a life time breath taking view of Everest and the Himalayan Mountains. It was worth the climb. Reflecting on the long path we just traveled I couldn’t help but think how lucky a kid from Waterford could be.
Seeing the other side of the world really opened my eyes to the fact that we have it so lucky here in Canada.

By our standards we went back in time, to a world before I was born. Simple things like jumping in the car to get groceries, taking a hot shower, using modern plumbing, having dependable electricity, a furnace for heat, air conditioning, even seeing a doctor just doesn’t happen there. The higher we went in the mountains the further back in time we seemed to go. To see people live like this was culture shock to me.

Living with “Trouble” seems like a minor detail, when I see how hard the Sherpa’s work to make a living high in the mountains, with none of the conveniences we have and yet they seem just as happy as we are, if not happier.

Thanks to Rob Hill and the whole IDEAS team for giving me the challenge to trek to Everest while educating people about IBD. I have spoken to many groups and schools about my personal experiences with Ulcerative Colitis on behalf IDEAS and have been pleasantly surprised by the encouragement and acceptance I have received. This opportunity has allowed me to show others that IBD does not stop me.

I made the best twelve friends ever on this amazing adventure and being on the other side of the world opened my mind to other cultures. It proved to me that I can do anything living with IBD and I who knows what adventures lay ahead!

Yes the only way to Base Camp is a slow and arduous trek, but your life doesn’t have to be like that. Never let IBD stop you!!

Carly is fund raising for IDEAS as part of her IBD Adventure. You can make a donation in her name online now, or if you’d prefer, send a cheque to the IDEAS office:

All donations over $20 will receive a Canadian tax receipt for charitable giving. For more information on IDEAS and its programs, please click here.