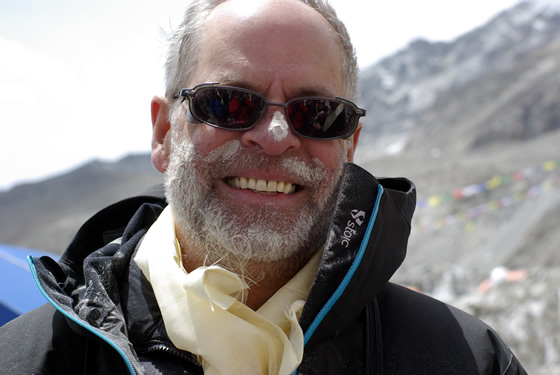 So, it was hard, right? Hard enough to give in? The idea was tempting, but I could not. Not with the encouragement I was getting from my new friends, and the example I was shown by a couple of teenagers who “won’t let IBD stop me!”

I thought my trek to Mt. Everest Base Camp would be a physical challenge. It was.

It turned into an opportunity to grow – mentally and emotionally – too.

I struggled with the thin air. Just as I thought I was acclimating, up we’d go again and I’d be huffing like a steam locomotive. Sometimes I’d take a step and have to rest. Step and rest. My legs were saying, “let’s get moving”, my lungs were pumping air in and out, but my heart was in overdrive trying to move too little oxygen through my overtaxed body.

So, it was hard, right? Hard enough to give in? The idea was tempting, but I could not. Not with the encouragement I was getting from my new friends, and the example I was shown by a couple of teenagers who “won’t let IBD stop me!”

An amazing team. “Bistarai” they would advise me – “go slowly”. When I finally dragged into the destination, they had always “just arrived a few minutes ago”. When I completed a big climb, to Namche Bazaar and into Base Camp, for example, congratulations and hugs waited for me. Encouragement was shared, along with snacks and water.

I include our in-country guides in my team. Our Nepali guides were able to take my mind off myself by talking about our respective families. I treasure the memory of those conversations, as I learned how much I share with men who live half way around the world from me. We both had stories about our children, remarkably similar in our worries and concerns and the absurdities that sometimes accompany fatherhood. We both have dreams and desires for them that we are doing our best to accomplish. I hope I was able to communicate to my Nepali friends just how important our (North American’s) families are to us, too.

My ostomy? Phew. Trivial. If anything, a convenience for those times when the sanitary facilities were anything but. In fact, I’d recommend that everyone traveling to the backcountry of Nepal get one! Well, not really.

However, I learned from my team members of the difficulties others have faced when ill, when deciding it was time for the surgery, and facing such a change at a young age. I was mature and settled when my surgery occurred, and I’ve never really known another person with a stoma. This was an incredible experience for me to learn from. I’ve learned how others have faced fears and overcome some significant obstacles. I feel at once empowered and obliged to make a statement about life with an ostomy, and if necessary, take a stand to educate people about it. I now really understand why it is important for IDEAS to communicate with people.

It was a hard trek, a long way up, along mountain trails with not a lot of air. That made the arrival at Base Camp so much sweeter. Meeting the challenge of my ostomy, physically and mentally, proved as rewarding.

Rob Hill: “Bob, it was a pleasure getting to know you. Your determination and courage in the face of the Everest trekking challenge is inspiring! Thank you for bringing your positive energy and enthusiasm for IBD education and awareness to Nepal. The way you’ve openly embraced life with an ostomy and your willingness to share your stories is an inspiration to ostomy patients everywhere. Thank you for sharing the mission of IDEAS through your trekking stories with family, friends and co-workers back home. I look forward to sharing another IBD Adventure with you in the future.”