After the experience of reaching his first 7Summits peak on Mount Elbrus in 2002, Rob Hill didn’t wait long to start planning his next climb, this time to the top of the highest free standing mountain in the world. Like many mountains around the globe, Kilimanjaro, at 19,334 feet or 5,893 metres above sea level, is actually an inactive volcano. Unique to “Kili,” as it is affectionately know in the climbing world,

is the sheer distance climbers must travel upthe mountain to reach the summit – the base of the mountain is actually very low, just several hundred meters above sea level. While climbing Elbrus was a several day process, because of the need to acclimatize to the altitude rather than cover the distance, climbing Kilimanjaro would take seven days to cover the distances necessary to reach the peak and let the body adjust to the thin air found at the summit. 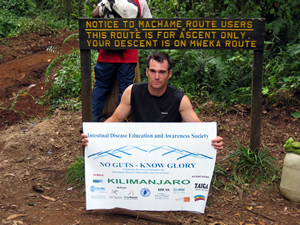 In early October 2003, Rob left Vancouver with several climbing and adventure seeking friends and traveled to Tanzania, Africa to begin the long, arduous, dusty walk to the top of the African continent. The Kili climb is an incredible biodiversity experience: trekkers walk through multiple climactic zones, from the lush flowering evergreen areas found on the lower slopes, through a dry, juniper-infused range trellising the mid-mountain zones, into a sub-alpine area grown thick with heather-like vegetation right up to the glacial areas that dominate the higher slopes and peaks of Kilimanjaro.

There are multiple routes up and down the mountain. Climbers always access the mountain through a local guiding and support outfit who provide expert guidance and climbing support for trekkers – food, camping infrastructure and porters.

Rob and his companions took the Machame route, widely regarded as the most scenic, but at a cost: several steep sections at altitude create challenges trekkers on other routes avoid.
Rob Hill often says that Kilimanjaro, of all the 7Summits, is by far his favourite. Not only because of the amazing culture and scenery found on the African plains, but primarily because each time Rob has been to Kili, he has been accompanied by friends and family. In 2003, his parents joined the expedition and it was time none of them will ever forget.

“Having my parents join me on the second summit was so important to me,” explained Rob. “They were there for me throughout my fight with Crohn’s and my subsequent ostomy surgery. My parents were there to take me to the hospital when I first got sick. I remember telling them I wanted to die, the pain was so bad.”

Rob’s mother stated: “He was so weak he couldn’t even climb the stairs in our house. When we took him to the hospital, the doctors told us his bowels had ruptured and attached to his liver. His body was going toxic and it looked like the Crohn’s was stealing our son. The surgeons had to remove his colon and give him an ostomy to save his life. None of us really knew that much about IBD in those days. We found out later it ran in our family. One of Rob’s aunts had been living silently with the disease for years. We knew then that silent suffering was the real tragedy in all of this.” 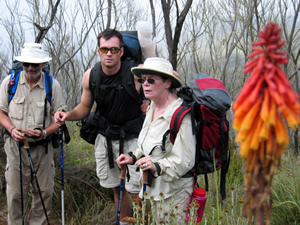 Rob healed slowly from his major surgery. When he told his parents he was going to dedicate the next years of his life to breaking the stigma surrounding his illness, they didn’t hesitate to support him. When Rob suggested that his mother and father travel to Africa and climb Kili, his father required some coaxing though. “I had introduced Rob to rock climbing when he was a teenager. But the kind of climbing we did together was rope up and scale a wall stuff. Not pack a big backpack and climb for a week to a peak in a far off place,” his father explained. “I told Rob we’d be there,” said his mom, then joked, “I told my husband he had to come so I wouldn’t have to share a tent with someone else.”
Also accompanying Rob and his parents were social friends from home who knew this would be the only mountain they’d climb together, as well as two of Rob’s regular climbing friends who had been on Elbrus and would go onto other summit attempts. The climbing portion of the trip lasted seven days. Trekkers were faced with long days of walking, a significant challenge given the high altitudes they were reaching each day. And like all multi-day climbs, the compound effects of altitude and the previous days’ efforts began to take their toll on the climbers.

On summit day, Rob’s parents were especially fatigued. “My goal wasn’t to reach the top,” his mom said. “My goal has always been to support my children. To watch them live their lives and share in the experiences they want me to share.” Rob’s mom decided just below the crater rim that she’d reached her summit. “I told Rob I was done, but that I’d be here waiting for him while he reached the top – I’d continue on in spirit and that I was very proud of him.” Rob’s father continued on to the edge of the crater rim. A peak to many trekkers, but not the official highest point on Kilimanjaro.

“We’d left our camp shortly after midnight,” Rob said. “Climbing through the night is always harder. It’s dark, it’s cold, it can be quite the nerve rattling experience for people who haven’t done it before. I was so thankful my parents had come on this trip. We always respect people’s personal decisions on the mountain. I wasn’t going to push them to go higher than they felt capable of. I couldn’t have been more proud of both of them for reaching as high as they did. When we arrived at Uhuru Peak at 5,895 meters just a couple of hours after sunrise, I carried them both in my thoughts and knew they’d be as proud of me as I was of them.”
Kilimanjaro marked the second peak of Rob’s No Guts Know Glory 7Summits campaign. He returned to scale the peak in 2009, this time as part of the IBD Adventures fund raising and awareness program of IDEAS. “That first Kilimanjaro summit in 2003 really provided the inspiration for the IBD Adventures program,” Rob explained. “The bonding that occurs as trekkers share incredible experiences together, it’s also a really unique way to share personal experiences with illness. We’d sit around the table eating and playing cards in the down times – that was when we would talk about intestinal disease and the importance of making people aware of them so they wouldn’t have to suffer in silence.”

Kilimanjaro is a special place. The local people and cultures dominate the area with infectious warmth, happiness and joy. The experience of trekking with locals acting as guides and porters transforms the lives of the people who decide to go there. Rob is determined to go back. The IBD Adventures program plans to return to Kilimanjaro again with Rob in the not-too-distant future – to inform, to inspire and to raise awareness of intestinal disease. They’ll also make sure to have a lot of fun in the process too!