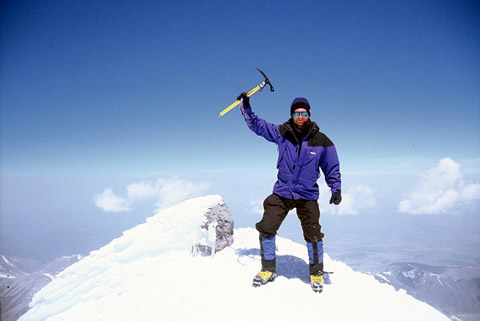 The winds were blowing. And the three climbers were tired. After fighting uphill in strong headwinds for a few hours, struggling through blinding snow and crusty ice below their crampons, the wind suddenly died. Rob paused his forward steps, briefly believing the break in the wind might last. It didn’t. As quickly as it had died, the wind slammed into him again, only this time from below. An especially large gust of wind picked the 180 pound Rob off his feet momentarily to slam him into the snow, packed tight to the side of the glacier slope leading to the summit ridge above. Rob gathered his strength, then yelled to Brian ahead… 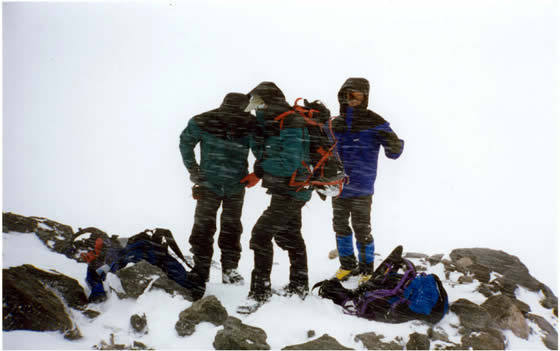 In July of 2002, Robert Hill began his quest to become the first person living with Crohn’s disease and an ostomy to scale the highest mountain on each of the seven continents – collectively known in the climbing world as the 7Summits. Rob’s dream began in an outdoor program he was taking at Capilano College, in the Lower Mainland area of British Columbia. Rob recognized the need to shed light on the plight of people suffering in silence with brutally painful intestinal diseases and he also recognized the time required to see such a vision become reality. Climbing to the seven highest summits on the seven continents provides the perfect medium – and time frame – for Rob’s No Guts Know Glory campaign.

While studying at Cap College, Rob met Brian Jones, of Squamish, BC, a local Canadian mountain guide who shared Rob’s climbing aspirations. The two shortly began planning the first of Rob’s seven climbs: Mount Elbrus in Russia, the highest peak on the recognized continent of Europe. Mount Elbrus, at 18,481 feet or 5,642 meters above sea level, is the highest mountain in the Caucasus range, separating the European continent from Asia near the border between Russia and Georgia.

That expedition featured four climbers, Marty, Rob, Dalyn and Brian, their guide, all Vancouver, BC based climbers. The foursome traveled through Moscow, then south to the base of Elbrus, a volcanic spire that sprouts some 50 glaciers from its summit feeding many rivers in the valleys below. The lower slopes of Elbrus are home to a ski area and the lift network serves to ferry climbers up the mountain to about 3,900 meters of elevation. Climbers must walk the glacial moraine and snow swept open faces to reach the peak an additional 1,742 meters above. These elevations are high enough to provide cause for caution, so climbers must gain altitude slowly, often retreating down the mountain in order to allow their bodies to acclimatize to the thinner air pressures and reduced oxygen levels.

Mountain weather rarely cooperates with the short windows international climbing affords and so it was for Rob’s first trip. Early on, the four climbers, facing daunting winds and temperatures, would climb up the slopes for several hundred meters of elevation gain over a handful of kilometers and then turn back to gain thicker air and much needed rest.

The first several days were so difficult that Dalyn decided he’d had enough and chose not to accompany Rob, Marty and Brian on the day they’d selected for their summit attempt. After a restless late evening sleep, the climbers set off for the summit in the middle of the night. They made decent progress early, but soon after sun rise the inclement winds and snows of previous days resumed and by mid-morning Rob and the other climbers were beginning to have doubts they would reach the summit. 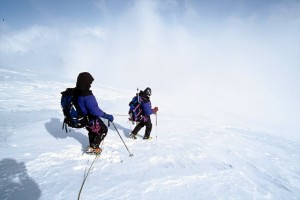 The winds were blowing. And the three climbers were tired. After fighting uphill in strong headwinds for a few hours, struggling through blinding snow and crusty ice below their crampons, the wind suddenly died. Rob paused his forward steps, briefly believing the break in the wind might last. It didn’t. As quickly as it had died, the wind slammed into him again, only this time from below. An especially large gust of wind picked the 180 pound Rob off his feet momentarily to slam him into the snow, packed tight to the side of the glacier slope leading to the summit ridge above. Rob gathered his strength, then yelled to Brian ahead: “We need to turn back. Marty and I are too tired to continue.” Brian required no convincing and the trio retreated over the next several hours to the relative comforts of the shack at the top of the ski hill.
The next day, both Marty and Dalyn decided they’d had enough of the weather and experienced enough of Mount Elbrus to call their climbing trip short. They hopped the lift down and flew back to Moscow to enjoy the sights and culture the Russian capital offers while waiting for Rob and Brian to bag the peak before their flights home. Brian and Rob, determined as ever, set off upwards again.

For a while, the weather cooperated and the pair made swift progress up the glacial moraine leading to the ice slopes above. The previous days’ efforts had taken their toll however; both men felt the fatigue caused by their aborted summit attempt in strong winds and their spirits sank as they realized the summit wasn’t to be in the next two days. Doubts loomed large as they descended back to the huts below, again too early to call the day’s progress any kind of a success. 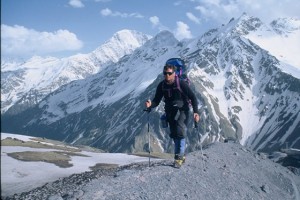 Brian suggested they take a break from the mountain. Rob agreed quickly and the two men jumped on the lift to head to the village below for warmth, a hearty cooked meal and a mental break from their goal above. A couple of Coca Cola’s and some BBQ later, a shared look announced they were both ready to resume their climb. They caught the lift back up, then settled in to rest and wait for the summit departure time shortly after midnight.

As luck would have it, this time the weather would cooperate enough to see Rob and Brian get higher on the mountain than they’d been before. They day grew long, but the summit grew close. They ditched their packs to lighten up for the final push to the summit. Half way there, Rob realized he’d left his summit banner recognizing his sponsors in his pack, several hundred meters below. Brian, the stronger climber on this day, volunteered to return to retrieve it while Rob slowly continued to the summit above. Brian soon caught up and the two crested the summit ridge shortly after. The first of the 7Summits was done.

“Standing on top of that mountain a huge wave of emotion swept over me,” Rob said. “I recalled my illness, my surgery, my plan to wake everyone up to intestinal disease and my dream to not let my Crohn’s disease or my ostomy stop me from living the life I knew I was capable of.”

Standing on top of Elbrus

“I thought of my parents, who had been so supportive of me in my fight with Crohn’s, through my hospitalizations and surgery. I thought of my dad, who’d introduced me to climbing when I was teenager and who had been the biggest financial sponsor of my first climb. At the top of Europe my dream of climbing the 7Summits really started to become a reality. I knew then that I could fulfill this dream and I realized I needed to work hard with the non-profit I helped to start – the Intestinal Disease Education and Awareness Society (IDEAS) – to eliminate the stigma surrounding intestinal diseases and ostomies in our communities.”

Rob’s father recalls receiving a satellite phone call from Rob while on Elbrus: “I heard the wind in the background. I knew they’d had a tough climb. Hearing they’d made it, Rob’s mom and I were very proud. Rob was living the lessons we’d tried to teach him throughout his childhood ‘Live with what life hands you’ and ‘If you’re not living on the edge, you’re just taking up space.’ After a brutal fight with a disease that nearly killed him, our son was achieving heights few people dare to even try.”

The next installment in our weekly flashback series sees Rob’s parents accompany him to Tanzania, Africa where Rob would climb the highest free standing mountain in the world: Mount Kilimanjaro. Check back for it on Friday, February 12, 2010. 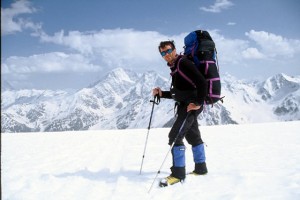