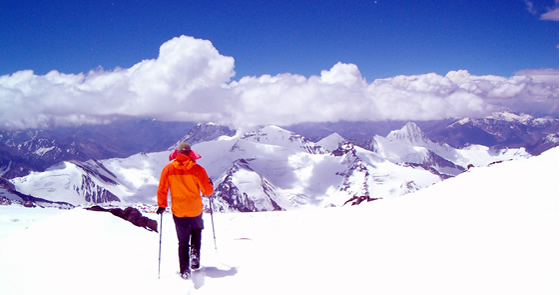 Sitting on top of that 22,841 foot peak I did what I always do. I reflected on all that occurred on my long journey to the summit. I was exhausted and elated at the same time. The challenges of Aconcagua, overcoming a disastrous first attempt in 2003, the extreme altitude and strange weather patterns, the travel, they were all behind me now. I still had to get down safely. But before the team would start down the glacier I had to steal a few moments for myself. I needed to honour my memories of the time spent with a new found friend in a mountainside clinic, recognizing the importance of intestinal disease awareness.

The Aconcagua story started in 2003, prior to Rob Hill’s first summit of Kilimanjaro. Rob was again part of a team led by Canadian mountain guide Brian Jones of the Canada West Mountain School, as on his first summit, Elbrus in 2002. For Rob, the 2003 attempt on the mountain was challenged from the start. 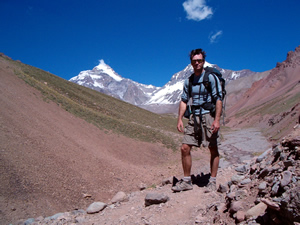 As with most of the 7Summits, altitude would offer the most significant challenge to the climbers. Aconcagua sits near the border of Chile and Argentina in the Andes mountain range and is the highest mountain in the Americas—it is the highest summit on the recognized continent of South America at 6,962 metres above sea level. At this altitude the air pressure is about 40 per cent of what it is in Rob’s home town of Vancouver, BC.

Climbers must be completely self-sufficient on Aconcagua. There are no Sherpas or porters to climb with them and carry the heavy loads. The distance of the routes is long, much longer than the route up Elbrus that allows for light loads. Instead, climbers must pack in all of the climbing equipment they will need along with camp gear—tents, sleeping bags, food and cooking tools. Pack weights are significant, exceeding 100 pounds at times; the team must have enough food and gear to last 22 days.

On the first trip in 2003 Rob developed a urinary tract infection. The infection quickly spread into his kidneys and Rob knew he needed medical attention. To get Rob to a clinic, and treatment, as fast as possible, a helicopter was called and Rob was airlifted off the mountain well below the summit. Dejected and disappointed, Rob found himself in a small mountain village health clinic, connected to IV antibiotics battling the demons of sickness once again. Only this time he would find himself thousands of miles away from the friends and family who had helped him throughout his early battles with Crohn’s and colitis, and through his surgery to remove his colon and give him an ostomy.

“It can be very strange how coincidence comes into play in my life,” said Rob. “At first when I was in the hospital there were a couple of other international climbers to talk to. I was feeling pretty crappy mind you, but the English speaking company was a pleasant distraction—until they were discharged.”

At this point in my story I was starting to feel a bit better, the antibiotics were doing their job and my fever was starting to decline. Another patient checked in to the clinic and was given the bed opposite mine. He had family with him much of the time. I understood very little of their conversations but it became apparent from the sounds their son was in a considerable amount of pain. I quickly recognized the source of the pain too—this child just couldn’t stay out of the bathroom. It seemed to me that as quickly as this boy climbed into bed—pale, weathered and emaciated as he was—that he would slip out of bed and scurry back into the bathroom.

Curious, I tried to find ways of communicating with the boy and his mother. I was thinking, ‘I think this kid and me have something in common, he sure looks like he has an intestinal disease’ but I couldn’t find the Spanish words to say this. Over the next few days I tried to find more ways of communicating with the family and they tried with me. I wanted to show them they weren’t alone, even though in this small remote town they likely presented the only case of IBD. We eventually found our own unique way of communicating and our long conversations confirmed my suspicions. I accepted that I was meant to be laying there in that hospital bed rather than in my tent high on Aconcagua’s camp two.

Laying there in that bed, thousands of miles away from home, Rob’s mission was confirmed. Awareness of intestinal disease is so important. There are so many stigmas in society about bathroom issues. People shy away from treatment and avoid diagnosis because of this. But even worse, the people living with these terrible, excruciatingly painful diseases often do so in the misguided belief that they are alone, that they suffer from a rare disease that no one else could possibly have. Sometimes Rob wishes this were true only because it would mean few people were inflicted with IBD. Fact is: IBD is more common than most people recognize. In Canada, which has the highest incidence rate of Crohn’s and Ulcerative Colitis in the world, estimates suggest more than 200,000 Canadians are suffering with these incurable illnesses.

Rob’s kidney infection went away after a few days of treatment in that mountainside clinic. He traveled home to Canada and immediately began preparing for his trip to Africa to climb Kilimanjaro. The call was already into Brian to return to Aconcagua in 2004. And they did go back together to successfully climb Rob’s third mountain in his No Guts Know Glory 7Summits campaign.

Compared to the previous year’s disappointing retreat off the side of the Andes queen, this climb was relatively smooth. No less challenging, but blessed by favourable weather and a gorgeous summit day, the expedition took 22 days round trip from Mendoza. The climbers worked together to ferry gear up and down the Polish Glacier Traverse route to establish climbing camps and allow their bodies to acclimatize to the thin, high mountain air. None of the problems that plagued Rob the previous year returned and he felt stronger as the days progressed, often taking on the responsibilities of food preparation freeing Brian to focus on other climbing-related guiding tasks.

Summit day started very early, with the team setting out in the dark hours shortly after midnight for their 14 hour climb 1,200 meters up the Polish Glacier to the top of Aconcagua. All of the climbers felt strong and the team progressed quickly towards their goal. With sunrise, they were greeted with spectacular views of the high peaks poking through the cloud-covered Andes mountain range. The team crested the summit ridge together to celebrate their success and sign the ceremonial summit book that is found at the peak. Rob found himself straying slightly from the group, seeking a few moments of solitude to embrace his very personal emotions.

Sitting on top of that 22,841 foot peak I did what I always do. I reflected on all that occurred on my long journey to the summit. I was exhausted and elated at the same time. The challenges of Aconcagua, overcoming a disastrous first attempt in 2003, the extreme altitude and strange weather patterns, the travel, they were all behind me now. I still had to get down safely, but before the team would start down the glacier I had to steal a few moments for myself. I needed to honour my memories of the time spent with a new-found friend in a mountain village health clinic, recognizing the importance of intestinal disease awareness.

Rob’s stories of climbing Aconcagua often gravitate to his time in the clinic rather than his time on mountain. “Certainly it was beautiful and a very special summit for me,” explained Rob. “But the climbs really are so much more than the mountains. The climbs are my way of trying to help other IBD sufferers and people living with an ostomy around the world. So while summiting Aconcagua was special and rewarding in its own light, what really stands out for me, what I vividly remember is the smiles shared with that boy in the Argentina hospital when we finally became aware, although we couldn’t speak the same language, we shared a special bond and neither one of us was alone.”