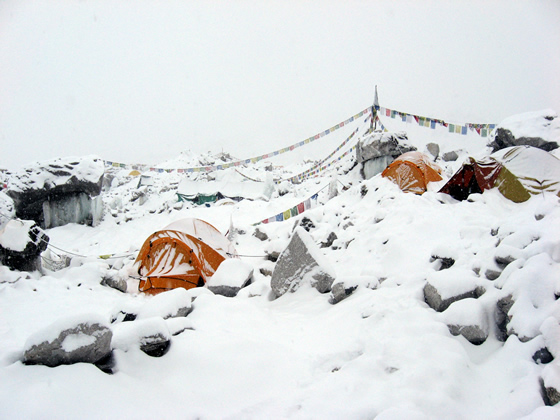 The No Guts Know Glory Everest team woke up this morning thinking tomorrow would be the day they’d head up the mountain for their summit attempt. If weather forecasts had stayed true, then May 17th may have been the magical day that Rob Hill’s 7Summits quest would come to a glorious conclusion at the peak of the highest mountain on earth. But as all things Himalaya this year, the forecast changed, along with our summit plans. 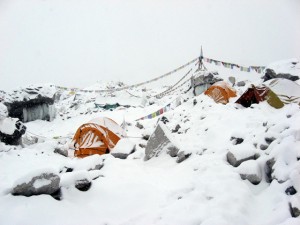 “For whatever reason,” Rob explained, “the jet stream has decided to stay parked over our area for the rest of the week. It may move north and south a bit, but not far enough to open a window with light enough winds for us to make an attempt. So, we’ll continue in our waiting mode and do our best to keep active and ready to go.”

Several teams moved up the mountain today hoping to take advantage of a potential window from May 15th to the 17th, but accounts from camp two suggest that some camps have been decimated and attempts to move up to camp three have been thwarted by high winds. We expect the wind to diminish somewhat over the next few days – summit winds have been 100 kilometres an hour plus for the past four or five days – but not enough to offer a good window. Any teams who decide to push up the mountain are taking considerable risks, including the chance of severe frostbite.

“We’ve been here too long and made too many good decisions to risk our summit chance on poor decision making brought on by impatience,” said John. “Why risk our one chance on an imperfect opportunity? The forecasts are calling for another window to open after May 20th. Most Everest expeditions don’t summit this early, so despite the early feel to this season, we’ll wait for a more traditional three or four day window to open. There is always the chance that another weather system comes through the area, but for now it looks like if we delay for another four or five days we’ll have more favourable summit conditions. We want to set Rob and Darrell up for their best chance at success. They’ve worked far too hard to take bad risks at this stage.”

We’ll continue to watch the weather closely and move up towards the summit when an opportunity presents itself. The wind continues to blow down the glacier through base camp, making blustery and cold conditions for those of us stuck in camp. Over the next few days the team will continue to climb up nearby peaks and return to camp for good rest, keeping energy and health levels high.