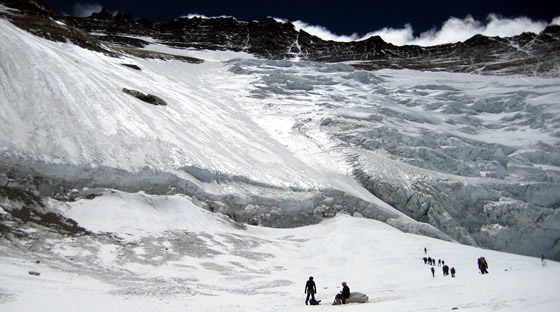 The weather window is shaping up nicely for the No Guts Know Glory summit attempt. A cyclone that formed in the Bay of Bengal has hit land and is on a weakening path away from the Everest region. As predicted, the jet stream has moved north of our area and the winds are slowly receding tonight. Unfortunately, the weather isn’t the only issue the team is dealing with today.

“I’m safe and sound in camp three after almost seven hours of climbing today,” said Rob. “Unfortunately Darrell and John aren’t with me. They decided to turn back to camp two at the Bergschrund as both of them just weren’t feeling strong today.”

“If I’d pushed through, that would have been my reserves for summit day,” explained Darrell. “It was the right decision to go down, rest up, refuel and try again another day.”

Both John and Darrell had a couple of off days in camp two. At this elevation, even the slightest upset stomach or bad sleep is enough to sap energy levels and prevent safe climbing.

“Rob is climbing strong right now. It was clear from today’s climbing that all of his stars are lining up for the next few days. Anything can happen still, but we don’t want our tiredness to prevent him from having success,” said a disappointed sounding John from camp two. “If I’d asked him to come down from the Lhotse Face, that extra few hours of climbing, plus the additional hours he’d have to re-do could be the difference between him reaching his goal or not. He’s a strong climber and technically sound on the gear system side of things too. Tomorrow Teng Dorje will link up with him before the Yellow Band and give him extra Sherpa support. We’re all confident they can climb well together.”

Tonight Rob will sleep in camp three along with Pimba Sherpa who has been busy boiling water and assisting Rob with whatever he needs. John and Darrell will rest up and try again tomorrow, hoping they’re feeling stronger again. The team has been in constant radio contact. We’ve scheduled another check in before sundown tonight and will reconnect at five in the morning tomorrow to assess everyone’s ability to continue up the mountain. Rob has been breathing bottled oxygen since arriving in camp three, albeit at a low flow rate. He’ll sleep on “O’s” tonight and climb on them from now on.

“I’m very disappointed that John and Darrell are not in camp three tonight,” said Rob. “In all of my thinking around this climb, I hadn’t pictured moving up the mountain without them. I trust they’ll get strong shortly and catch up, perhaps we’ll reconnect in camp four? You never know, I could wake up feeling weak and wait for them in camp three. I wasn’t feeling the love on the day we came up through the Icefall and decided to spend a night in camp one. It gave me a mental break and probably left some gas in the tank, gas that Darrell and John may have burnt climbing up the Western Cwm in the blazing sun. It’s the Himalaya, you just never know how your body is going to react to the demands you ask of it. If I climb tomorrow, I will have two very strong Sherpas with me, thankfully.”

The summit push began on May 18, 2010. Rob Hill is trying to raise $29,035 for his non-profit, IDEAS, during his Everest climb. That’s one dollar for each foot above sea level he must climb to achieve his dream. To help him reach this lofty goal, please donate online now, or if you’d prefer, send a cheque to the IDEAS office:

All donations over $20 will receive a Canadian tax receipt for charitable giving. For more information on IDEAS and its programs, please click here.